Tonight, Aston Villa face Watford at 7:30pm – with the opportunity to leapfrog the Hornets who currently sit one point above the Villan’s, after going unbeaten in their last five Premier League games (D, W, W, W, D).

Villa must look to gain all three points to drag themselves out of the relegation zone against a fellow relegation contender.

View Across the Dugout:

Ahead of tonight’s important match under the lights at Villa park, I spoke with Watford fan and host of the “From The Rookery End” podcast, Jordi Connor (@jordiconnor), to provide us with our view from across the dugout this week.

Thank you for taking the time to answer these questions, Jordi.

Pearson is your third manager of this season, do you think making decisions such as changing the manager have been needed to ensure your survival in the league?

It was certainly needed before Nigel came in, however I was disappointed when Javi Gracia was sacked. We’d started the season poorly but there had been moments in games where the luck hadn’t gone with us. Good chances being missed which would have given us a lead, individual mistakes from defenders at key times, officials not implementing the rules and so on. The poor end to last season was held against him, but at the time everyone’s focus was on the Cup Final. Losing it 0-6 wasn’t fun, but it is was only the second time we’ve been to Wembley for a final so in the context of our history he achieved a lot and maybe deserved a bit more time.

That said, there was talk after he’d gone that the board had been concerned about him in the summer so maybe there were issues behind the scenes. However, the appointment of Flores didn’t smack of a great deal of planning. He’d done well for us when we first came up, but if he’d stayed we would almost certainly have been relegated. The turnaround under Pearson has been a joy to behold.

So in short, the first change felt a bit too quick, the second was critical.

Pearson has an impressive track record in terms of keeping teams up, do you think you’ll avoid the drop this time round?

Yes. In every previous Premier League experience we’d been one of the worst three teams, if not the worst and got relegated after a season. This time round we’ve managed to stay up for a few seasons and Pearson has the players that Gracia had fighting for a European spot last year. What Nigel has done really well since coming in is to put the pieces together that gives the team defensive stability and an attacking threat. Our squad is a mid-table squad so getting average performances out of them will be enough to stay up. But we are not out of the woods by any stretch.

Watford tore us apart at your place not so long ago, do you see this game going the same way?

I hope so, but I doubt it. You are at home, we start at 0-0. It could go either way, both teams know that it is an important game. While both teams might be happy with a point, you wonder whether both teams can keep a clean sheet!

You’ve got some difficult fixtures ahead, where do you expect yourselves to be in 4 games time?

On one hand, every game is difficult. On the other, there are only two teams I don’t expect us to get anything from. We’re playing Liverpool at home at the end of Feb. Anything from that will be a bonus. The other games we could get something out of even if three of them are away from home. I want us to keep progressing and pick up at least one win, which we are fully capable of doing.

Troy Deeney loves scoring against the Villa, what’re your opinions of him as a player?

He does and I hope he goes to bed happy! He is more than a player for us. He is a talisman and has been part of our rise leading by example the whole time. He has matured and adapted his style to fit the teams needs. Right now he has two pace merchants either side in Sarr and Deulofeu who love running with the ball. That leaves Troy up on his own rather than having Ighalo, Vydra or Gray alongside him as he has under previous managers. He’ll keep doing his thing and keep cementing his place in Watford history. Like many players from less fashionable clubs, there is a false (and lazy) perception of him. He’s not just a lump that puts himself about, he is a good footballer. Plenty of strikers haven’t made the leap up from the Championship to the Premier League, but Troy has been a first team player and the captain of a decent Premier League side for the past few years. 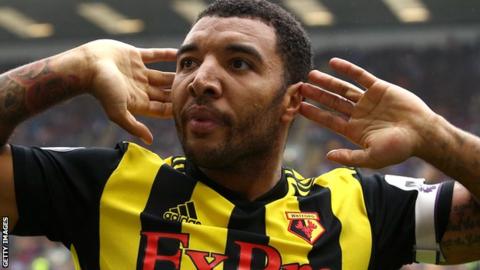 Who do you look at being the danger man for Villa?

Jack Grealish. Has any opposing fan given a different answer all season? I’m sure you’ve got other good players, but he is your stand out performer.

Who should we keep an eye on from yourselves?

I would have said Sarr, but he is injured. Another thing Pearson has done well is raise everyone’s level so there aren’t any standout players. Etienne Capoue is a Rolls Royce, I love watching him. Alongside him, Nathaniel Chalobah has taken his chance under Pearson, he has a lot of potential so keep an eye on him.

Foster, Mariappa, Masina, Cathcart, Dawson, Chalobah, Capoue, Doucoure, Deulofeu, Deeney and Pereyra I’d imagine. Nigel doesn’t mess about with a team that has delivered unless he has to so only Sarr from Saturday is likely to miss out.

Dare I ask for a score prediction?

You can ask, but I wouldn’t be betting on the game even if I wasn’t a fan of one of the sides. We are the two ‘form’ teams in the bottom half, so it really could go either way. Other than Man City, you’ve kept it tight of late. I expect it to be cagey and wouldn’t be surprised at any result. The first goal will be critical. However, in the context of the season the result is more important than the performance and I’d be delighted with a single goal away win.

I don’t think I’ve been this nervous for a game in a while. These are the kinds of games where players need to stand up and show to us what it takes. Since Pearson’s arrival Watford have proved they’ve got what it takes to stay in the division, and after a shocking away performance from us in December, it’s vital that we get the three points and drag Watford back into this.

We cannot rely on other teams to get us out of our situation, we must take action and start getting points on the board. Despite Samatta not being able to play in this fixture, the club finally signing a striker should lift the spirits of both the players and fans.

Click the link below to view my thoughts on the signing of Tanzanian striker, Ally Samatta and let us know your reaction in the comments section below!