Following our recent announcement that we’ve teamed up with FansBet

The only betting company where you and fellow supporters of the team you love can always benefit – you may or may not have already seen details of their World Cup 2018 Fantasy Football game.

The game is free to enter for the first 1000 entrants (£11 thereafter and for any additional entry) and if you’ve been following our social links then you might well be reading this as one of the lucky ones and already playing for a chance to win a share of the whopping £25,000 prize pool.

Hands up. Yup – I am one of those people!

Fortunately for you it’s not too late to get involved. You have until Thursday 14th June to get your entries in for Game Week 1. At the time of publishing this article there were still around 250 FREE entries available… SO GET ON QUICK!

Before picking your squad it’s imperative that you digest the bare essentials of this particular game (every Fantasy Football competition runs differently):-

2) You must pick a squad consisting of 15 players

Despite filling you in on what I personally consider the important stuff, I’d still encourage all players to read-up on the gaming rules as well as the scoring system.

You think you can beat me?

World class goalie but selected primarily due to the fact that the third best nation in the world are taking on World Cup debutants Panama in Game Week 1. In five international matches since the turn of the year Panama have found the net just once (versus Trinidad & Tobago) and I just can’t see them playing too much football in Belgium’s final third.

I’m quietly confident that the tournament hosts will keep a clean sheet against the Saudi’s in the curtain raiser on Thursday afternoon. Kudryashov has been an ever present for the national team since 2016 and is in prime position for a starting berth. Plus he has a pretty cool name.

Gotta’ do the patriotic thing and include one of our own (plus it helps that he played for the Villa for half a season at the start of the decade). I’d quite happily take the same 2-0 score line the Three Lions beat Tunisia by back in France 98′. Clean sheet = points!

Granted there are probably better options than the Danish defender for five million quid but he’s a solid centre-half who has impressed me at times this season. The Danes’ find themselves up against Peru in their opening group match, and although the South Americans are in-form heading into the tournament, Denmark are sturdy at the back and have kept out their opposite number in 4 of their last six outings.

The Spurs defender recently celebrated his 100th appearance for his country and one thing is for sure; over the past 11 years in international football he’s been able to fend off much more threatening strike forces than what he’ll be coming up against in Sochi on the 18th June.

Failed to do bits in a struggling Saints side this season and you might be surprised to hear that he’s made my team ahead of Luka Modric (whose available at the same price) solely because I think he does possess the quality to pull-strings against an unfancied Costa Rica. Just a feeling that the world stage will bring out the best in him!

My third and final Belgian. I’d have had more if I was allowed to! A phenomenal player who’ll be given licence to roam against poor ol’ Panama. I fancy him to get on the score sheet in what I’m predicting to be a rout, hopefully gain a few assists whilst he’s at and go on to bag me double points!

Surprisingly only the joint third most expensive French midfielder in the game behind Nabil Fekir and Florian Thauvin. Failing to shine under Mourinho, but I think that says more about the manager than Pogs himself, and I just sense he’s going to use this stage to show just what he’s all about. #FREEPOGS

Well you know if the magic man Messi is singing your praises – as he has been recently – then you’re onto something special. Griezmann can pull strings and change games, popping up wide left, in behind the main forward or playing as a number 9. His in-game awareness is quite simply going to bamboozle the Aussies when the French come to town.

I didn’t have much left in the bank when I selected Son but I’m more than content at his inclusion in my starting XI. I love work-horses and I’ve got a sneaky feeling his energy might just rile the Swedes in South Korea’s opener. 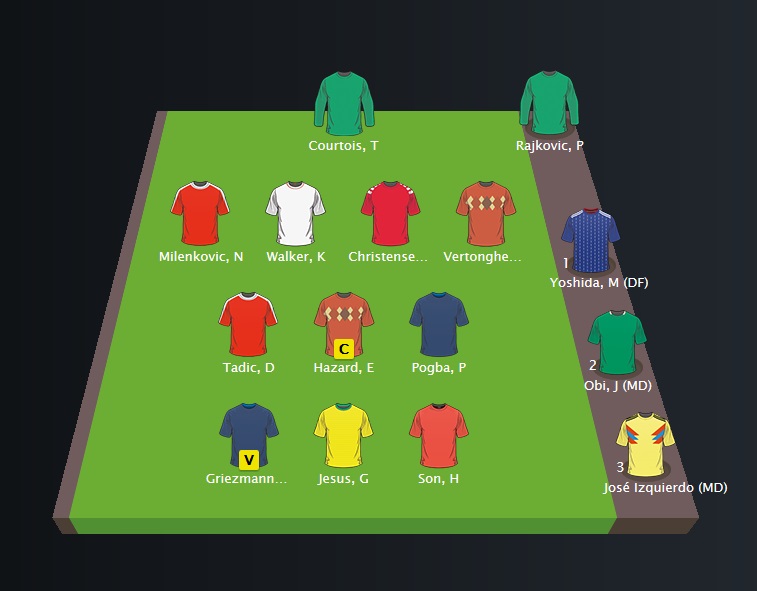 If you think that you have what it takes to beat me then go give it a go yourself.

Simply sign up to FansBet and when registering select Aston Villa as the team that you support and Heart of the Holte from the drop-down.

Once registered go to the Fantasy section and follow the instructions.

Players must be 18 years or over.