In what can only be described (at best!) as a nightmare two weeks since the playoff final defeat, bombshell after bombshell has been landing on B6 ever since.

From the realisation that the team is being ripped to shreds to the twisting, sick-to-the-stomach feeling caused by the reality of our FFP position. It was thought that Villa fans had suffered enough. A significant amount of negativity was emanating from the fan base although positivity from certain sections was beginning to break through. However, in true AVFC style of recent years, we have had the truly astounding admissions which were revealed yesterday kept up our sleeve… we owe money to HMRC and IT IS VERY SERIOUS.

Whilst there is still hope that Xia may be able to work his way out of this epic mess (even by AVFC’s recent standards), there is no question about it, THE COMING PERIOD IS THE GREATEST THREAT TO THE EXISTENCE OF AVFC IN A GENERATION, POSSIBLY EVER!

Whilst it is almost impossible for you to be reading this article and not know what happened yesterday, just in case you are unaware, AVFC have failed to pay tax to HMRC reportedly to the tune of £4m. On the same day, Keith Wyness was suspended by AVFC. If the HMRC tax bill remains unpaid, HMRC will issue a winding up order against AVFC (this hasn’t been done yet and will be a last resort).

Why has Keith Wyness been suspended? Is this just because of the unpaid tax?

There are two key theories being circulated at the moment.

Keith Wyness, worried about the cashflow position, has been telling Xia regularly of the impending crisis if this tax payment is not made. Xia didn’t like this advice and as a result suspended Keith Wyness. This is the Keith Wyness angle.

Keith Wyness, post play off final defeat, has been leaking highly confidential information to a UK consortium who Wyness has links with. The reason being to drive down the value of AVFC and to force Xia into a sale to Wyness’ mates. Wyness was attempting to take AVFC into administration to facilitate this. This is the Dr Tony Xia angle.

To me theory one just does not make sense given the information and statements which have been released over the last two weeks. Why would Xia suspend his CEO for having conversations that CEOs and owners would have all of the time?

Knowledge of the suspension came after the HMRC tax bill was leaked to the press. Journalists in the main have had a blackout of information from AVFC. Hardly any journalists have broken stories under the Xia regime as Xia announces them himself. Then all of a sudden, a UK consortium is heavily linked to purchase AVFC and a few days later, the unpaid tax bill is released as an exclusive by the press. Furthermore this is just days after Xia states “Very difficult to verify ppl showing their real personality and humanity at this tough moment”. Something stinks and Xia feels betrayed.

So what is really happening – my theory

Dr Tony Xia has the funds available to meet our cashflow requirements, however he is struggling to get them out of China. We have serious cash flow problems and I presume in the short term, we will get a loan to cover these. This is only a very short term solution though given the extent of our cash flow woes.

However, Keith Wyness has spotted an opportunity from the problems being caused from funds not being released from China. Although this was never envisaged when Wyness and Xia decided to work together, Wyness has stabbed Xia in the back by trying to facilitate a sale through driving the price down through attempting to force AVFC in to administration.

I fully believe that Xia does not want the club to go into administration and is doing everything he can to prevent this from happening. However, Wyness is just interested in himself and if pushing the club into administration helps line his pockets further, he does not care about the club one bit. He is a snake. What we have witnessed over the previous two weeks is, in my mind, a corporate version of an attempted coup on the Xia ownership of AVFC. Matthew Southall of MSE CAPITAL GROUP LTD (10245329), who is the name behind the UK consortium, has a track record very similar to Samuelson with late accounts and previously dissolved companies. This attempted coup just stinks of Samuelson, Wyness et al in its approach.

Furthermore, before Xia ws brought in, we had Mervyn King and David Bernstein on the board. Once they found out Wyness and Samuelson were involved, they didn’t want to touch the club with a barge pole. Why? They knew something about Wyness, I’m convinced. Boy how we could have done with a financial guru in Mervyn King overlooking everything and having the interests of AVFC at heart. If Xia survives and the board is restructured, I implore him to fill the board with people of Mervyn King’s credentials.

The extent of our financial woe

I have continually seen comments that us ‘fans’ need to wait for communication to be released from the club before being able to make any comment. That is absolute rubbish and it is the attitude of fans who just want to stick their heads in the sand and hope it blows over. Now I’m not criticising fans who want to take this approach however they should not be criticising fans who are carrying out detailed analysis of publically available financial statements and comments released by the club. The situation we find ourselves in is not a shock but the club won’t disclose severity of the issues until the horse has already bolted (like we saw yesterday). The warning signs have been there and as far back as February 2018 my FFP article concluded “It is my opinion that it is this season or else. I just cannot see how we can turn the losses around”. Indeed the auditors stated themselves the following: 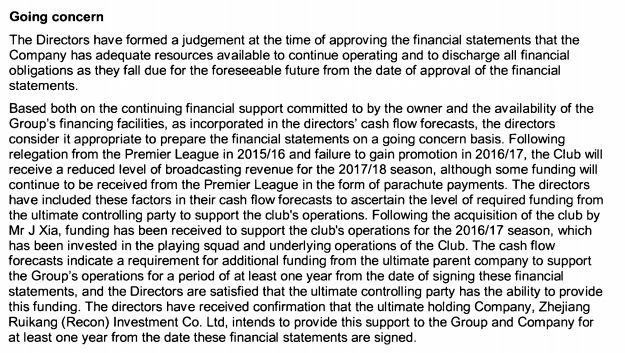 From the 2016/17 financial statements we were haemorrhaging funds and by my calculations we were cash flow negative in the 2017/18 season to the tune of £42m. This season coming? Who knows as the payment terms for the £88m transfer spend influences this massively however we are in dire trouble. If we need to raise similar funds again in the year (my rough guess would be £50m), and if Xia cannot put his money into the club, we will either have to take out huge bank loans, sell off our assets or sell the club. If these things do not happen, we will fall into administration. It is that serious.

This course of events won’t play out over the next couple of years either, we will know within the next two months whether we have a short term solution or not.

When we sit back and assess what we now know though. How the hell has this happened! Football clubs do not ‘forget’ to pay tax bills. It hasn’t been paid because the money simply isn’t there. Why weren’t auditors asking more probing questions as our accounts are a car crash? Why hasn’t the EFL intervened? Cash flow is much more important than P&L to ensure a club keeps running and doesn’t saddle a club with debt. Why haven’t journalists found out more, questioned Wyness more, pushed the club more?!? It is unbelievable, it really is. How is a club 140 years + old suddenly in this position through mismanagement. Coaches need to UEFA qualifications, how about owners have to undertake a football version of an MBA? The list of huge clubs who have been allowed to get into all sorts of mess is simply not acceptable.

The question we next need to ask is, if we couldn’t pay previous months’ PAYE tax, how are we going to pay the players their salaries in future months? This really is a scary time to be an Aston Villa fan. Xia has been naïve but I am convinced he has the required funds. However, unless this cash outflow problem from China is solved, he could be the world’s richest man and it wouldn’t matter at all. Hold on tight AVFC fans and know might be the time to start praying…

Whilst you’re here we would appreciate it if you listened to our latest edition of The Villa Filler Podcast: Xia back-stabbed by Wyness? Listen below on YouTube and follow our new SoundCloud!